What is the strategy? Why did I select this strategy?

The strategy is to prepare for and then to have a full class debate. Having a debate is an opportunity for students to research one aspect of a topic in depth. They can become the expert in that part of their subject and then have the chance to defend this aspect to their peers. In the process they will also have to become familiar with the aspects of the topic that their peers are studying so that they have a broader view of the subject as a whole.

How was this strategy used in this class in particular?

In this class the debate was: “What is the most likely way we will find life in the universe?” The class was divided into 7 teams that were each assigned to defend one method by which we were going to find life:

This debate was done over 2 class periods each lasting 1 hour and 50 minutes.

The first class day the students had to research their point of view, develop their opening statements, and consider how they were going to argue that their method of finding life was the best/most likely one. To do this they were asked to create a summary of their method and why it was best. Once this summary had been assembled it was projected on the monitors and everyone had a chance to go read the summaries of all other groups. After the reading and discussion with other groups was complete the students went back to their seats, prepared their opening statements, and started to consider how they were going to rebut the claims from the other groups. The slides below show the information they were given on the first day. 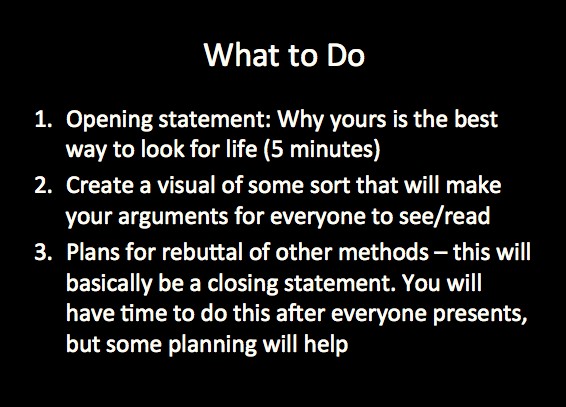 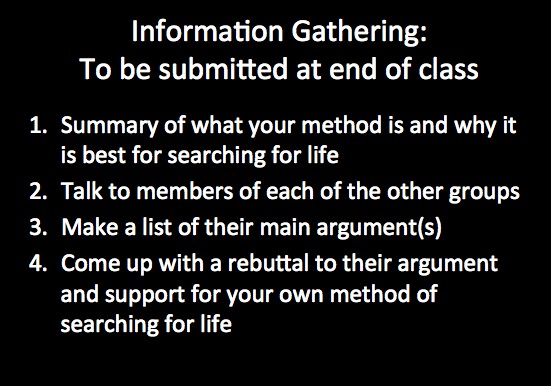 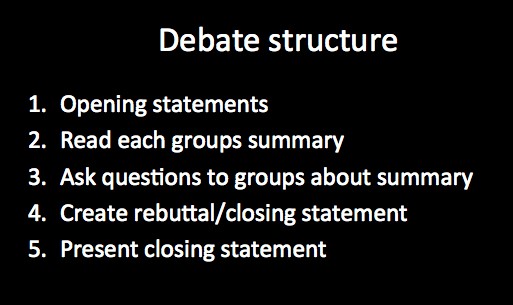 On day two each group started with 5 minutes to present an opening statement. When those statements were done they each posted a single slide summarizing their arguments. The students then had time to walk around and read all of the summaries and think about questions for the other groups as well as their rebuttal/closing statement. After returning to their seats, students had a chance to ask questions of other groups. After the question session they had time to finalize closing statements (~15 minutes) and then to give them (3 minutes per group).

This class is taught in the ALT room at Mason. This is a 72 person capacity room that is set up with 8 round tables and an instructor podium in the center. The image below is roughly what it looks like except that the whiteboards are actually the full walls (whiteboard paint) providing even more writing space than what is shown here.

The class that this debate was used for was for is a general education lecture+lab course that is taught studio style (i.e., lecture and lab are blended) in the room. This is a course for non-majors and had 39 students enrolled. Because we did not fill the space, only 7 of the 8 tables were in use with 4-6 students at each table. Each table was a single group for this exercise – in general there are one or two groups per table for our in-class work. 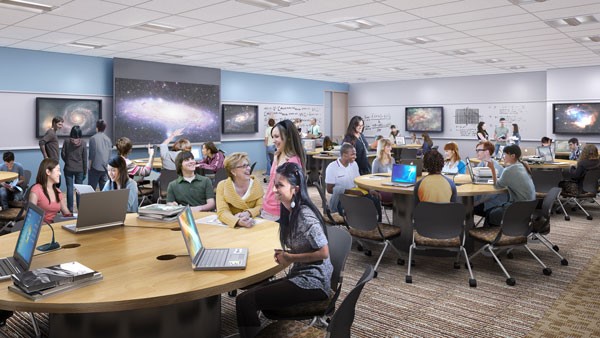 Class setting and group size for a debate:

The class setting and size for a group activity like this debate is important. This would be a very difficult activity to run in a lecture hall setting with a large number of students. The students need the opportunity to work in groups to prepare their answers. Seven groups is close to the limit that would be manageable. Also, depending on the question, it can be difficult to assign a large number of different points of view, seven taxed the limit of this topic. A final issue with class setting and group size is that the groups were larger than I would generally like with 4-6 students instead of 2-3 instead. For the larger groups there were definitely students who were not engaged. In fact it seemed like one of the sub-groups tended to dominate the work on the project while the other sub-group was less engaged. This may have been at least been partly due to my table engineering which had a stronger group and a weaker group at most of the tables.

How do these tasks fit into my class?  How long will they take?

This will take an entire class or two. In this case it took two classes but some of the preparation could be done outside of the classroom such that it could probably be compressed into a single class.

For my class I graded this as a lab. I think that work of this sort does have to be graded to motivate students. This was one of the rare cases that I graded exclusively on getting the work done (which means that students got sull credit if they were in the class). I also gave bonus points (10 points) to the team voted as “winner” of the debate. After the fact I decided to also award a bonus to the major spokespeople in the debate who were not on a winning team (5 points).

The best part of this exercise was when the students got to ask questions of other groups. Some of the students (~50%) were very engaged, challenged the other groups fairly strongly, and really enjoyed the slightly heated discussion. While the opening statements were only decent, the closing statements were MUCH stronger indicating that they really had depended their knowledge and ability to discuss it during this process.

Groups of 4-6 students are too big! Particularly in the larger groups (5-6) there were students who were just not engaged in the activity. In general in the class the groups of 2-3 have worked better that way. There are still a few students in those groups who don’t engage, but the numbers are much smaller because it is much more difficult to hide.